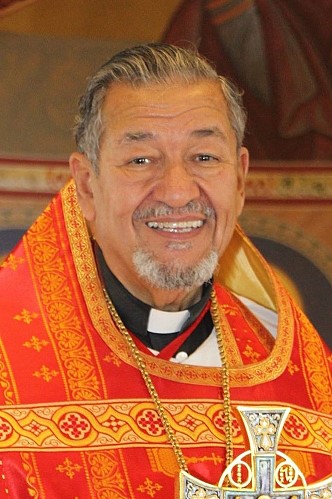 Archpriest Ernesto Rios, 79, fell asleep in the Lord on December 15, 2020, after contracting COVID-19. He was born in San Juan, Puerto Rico on January 28th, 1941. His family moved to New York City, NY, where he would eventually attend Eckerd College and serve in the Air Force. During this time, he married his wife, Marta Gladys (Rosado), and they had four children. He worked as an air-traffic controller after leaving the Air Force. Raised as a Roman Catholic, he converted to the Orthodox Faith and attended Saint Vladimir’s Orthodox Theological Seminary. He was ordained to the Holy Priesthood in 1979 by His Beatitude Metropolitan Theodosius at Saint Andrew Church in Dix Hills, NY, where he briefly served.

In 1980 he was installed as Rector of Saint James the Apostle Church in Port St. Lucie, FL, by His Eminence Archbishop Dimitri. His work expanded the community, and they moved from a small geodetic sanctuary to the beautiful facilities completed in 2011. In 1995, Father Ernesto was appointed as the Dean of the South Florida Deanery. Father Ernesto served at Saint James for 33 years and was loved and respected by a diverse congregation including many converts to the Orthodox faith. He retired in 2014. He continued to serve the Church tirelessly, traveling from Port St. Lucie, over 200 miles to Pine Key to help plant a mission church there. After a hurricane wiped out Pine Key, he continued to serve as a fill-in priest for the various Orthodox jurisdictions of South Florida.

Diocese of the South Chancellor, Father Marcus Burch stated, “Father Ernesto had a ‘bigger than life’ personality and a warmth of soul, depth of compassion, and joy that radiated the beauty of Christ and the Kingdom. He embraced all those whom he met with the fullness of that joy. He will be missed.”

Father Ernesto will be remembered for his warm affection, kindness, sense of humor, and selfless love which he had for his spiritual children and all who came across his path. He labored tirelessly for over 30 years building up his beloved Saint James the Apostle Orthodox Church and faithfully serving God in the Orthodox Church of America.

He is survived by his wife, Madracita Martha, three sons and one daughter, grandchildren, and great-grandchildren.

The Burial Service for a Priest will take place Friday, December 18 at 7:00 PM at Saint James the Apostle Orthodox Church, Port St. Lucie, FL. His Eminence Archbishop Alexander will preside at the Divine Liturgy on Saturday, December 19 at 10:00 AM.

May Father Ernesto’s memory be eternal!